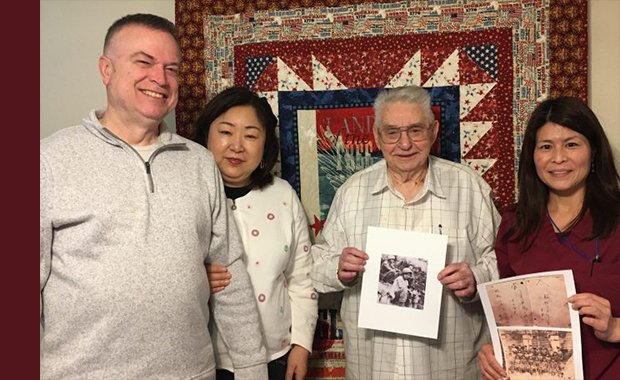 On a WWII battlefield on the Japanese island of Okinawa, Combat Infantryman Harvey Drahos’s unit scrambles for cover under machine-gun fire, when he looks down and notices something precious laying on the ground below him. 74 years later, at his home in Olympia, he shows his Advanced Health Care aide, Yukiro Mozer, what he found all those years ago, 88 pictures from a photo album that he had stumbled across amidst the burning rubble of the battlefield. Mozer is shocked, and she too recognizes the importance of the irreplaceable historical pictures. So, the two work together, examining the photos for clues, unraveling a puzzle that will enlist the help of many others here in Olympia and halfway across the world. With Mozer’s help, Drahos began the quest to reunite the pictures with their rightful owner.

During the battle, Drahos picked up the album and stuffed it in his uniform for safekeeping. When he returned to the states following the war, he put the photos in a box in storage. “I forgot all about them,” says Drahos. When tidying up, he rediscovered the pictures and began to look through them laying them out on the bed in his guest room. The pictures, predominantly portraits, were taken before the war visited the tiny island in the Pacific.

Around the time Drahos rediscovered the pictures, he began receiving in-home care services from Mozer. Mozer is originally from Japan and speaks both English and Japanese. Many of the pictures were marked with Japanese characters on the back, and Drahos hoped that Mozer would be able to help him translate the writing. However, when Mozer looked at the writing, she was only able to read a bit, recognizing that most of the writing was from an older form of Japanese that she couldn’t read. Mozer knew an English Japanese translator, Hiroko Cassidy, and hoped she would be able to help her with translation.

Unfortunately, Cassidy couldn’t translate the photos either, but the group started working with other friends and acquaintances who might help them decipher the old Japanese writing. It wasn’t until Cassidy met someone with connections to the NHK Japanese Public Broadcasting Corporation that the group was finally able to get some traction in their search. “It was a total coincidence,” says Cassidy. “I just happened to mention the photos, and she got us in touch with someone from NHK.”

The NHK team in Okinawa was able to track down 78-year-old Yuken Kuda, whose name appeared on the back of one of the photos. In the photo, Kuda is a small child standing alongside his parents and younger sibling. Kuda was able to identify the original owner of the photo album, Choyu Nakamoto, who passed away in 2010.  Finally, the mystery was solved, and the photos were returned to the Nakamoto family.

The album also included pictures of a locally famous poet in Okinawa, as well as pictures of the current Vice Governor’s father. Some of the subjects in the album couldn’t be identified, but many have, and they are being given to the next of kin. Since returning the photos, Drahos has been moved by the gratitude expressed by the family members and enjoyed hearing stories about ancestral resemblance that the families have discovered. The Vice Governor recently sent Drahos a letter, thanking him. “I was so moved and I cried to receive my father’s picture,” the letter reads. The letter goes on to say that the Vice Governor’s father passed away 36 years ago and that he was so happy to see him after all this time.

The 82-day battle of Okinawa was the bloodiest battle of the Pacific War. Exact counts vary, but according to most sources over 15,000 allied forces were lost and over 200,000 Japanese forces and civilian Okinawans died in the fighting and from injuries sustained during the battle. Alongside the casualties was material loss. Buildings, furniture and clothing could all be rebuilt and replaced, but the photographs were gone forever along with the loved ones. Now the Nakamoto family has some of that history back.

Besides reuniting family members in Japan with pictures of their loved ones long passed, the photos have had another unexpected impact. Hiroko Cassidy’s husband, David Cassidy MD had a special interest in the photos, as his father also served in World War II. As it turns out, Cassidy’s father had served in the 7th Infantry Division alongside Drahos’s 96th Infantry Division during the battle of Okinawa. Though Drahos never knew Cassidy’s father, he has formed a new friendship with the Cassidys since working together to solve the photograph puzzle.

“During the war, America and Japan were enemies,” says Mozer, “even so, Harvey was able to save these photos and return them to the families, now as friends.”