Part One: The What, Where, and Why of MS in the Pacific Northwest
Written by: Charles Hitztaler, AHC RN Supervisor

Here in the Pacific Northwest multiple sclerosis (MS) is a serious disease affecting many individuals. We Washingtonians point our fingers at every facet of our lives and environment from the water we drink to the air we breathe. However, the true cause of MS continues to remain a mystery and although rates of disease in some areas such as Eastern Washington remain triple that of other regions actual rates and causes are not often what they seem at surface level. This post will discuss many aspects of the disease from its early beginnings to the promising research currently conducted to help you understand what the disease is, how it affects our area, and what to do when you have it. We will also provide you with a list of resources along with the references used to write this post and others in our multiple part MS series.

The first individual credited with the discovery of multiple sclerosis (MS) is Jean-Martin Charcot who is considered by many to be the father of neurology. Although autopsy drawings dating back as early as 1835 first outlined what was likely multiple sclerosis it was Jean-Martin Charcot who distinguished the symptoms of MS from other nervous conditions at the time. His detailed notes outlined the disease in what he described as “la sclérose en plaques” where he recognized lesions extending from the ventricles into the cerebral hemispheres involving both the brain and spinal cord.

Throughout Charcot’s life the mysterious disease confounded him as he moved from treatment to treatment even going so far as to use strychnine a deadly poison often used in that time period to stimulate nervous impulses. Today, 148 years following Charcot the disease continues to baffle scientists as the slow crawl to a cure continues through the tireless efforts of researchers across the globe. Currently, several theories attempt to illuminate this mysterious disease. We now know the disease is autoimmune resulting from immune cells attacking nerves, disrupting signals sent from the brain to the body. What we do not know is the cause. A popularized ad campaign through the Pacific Northwest’s MS chapter draws attention with the simple question, ‘why here’.

In answer to the questions fingers fly in all sorts of directions as residents point towards our weather, water, and even the air we breathe. Ultimately, the true cause continues to elude us, but doctors have come to some understandings regarding why rates might be so high here. One of the major contributors may relate to a clustering of MS around the 49th parallel extending its high rates across the pond into many Northern European countries such as Scotland. 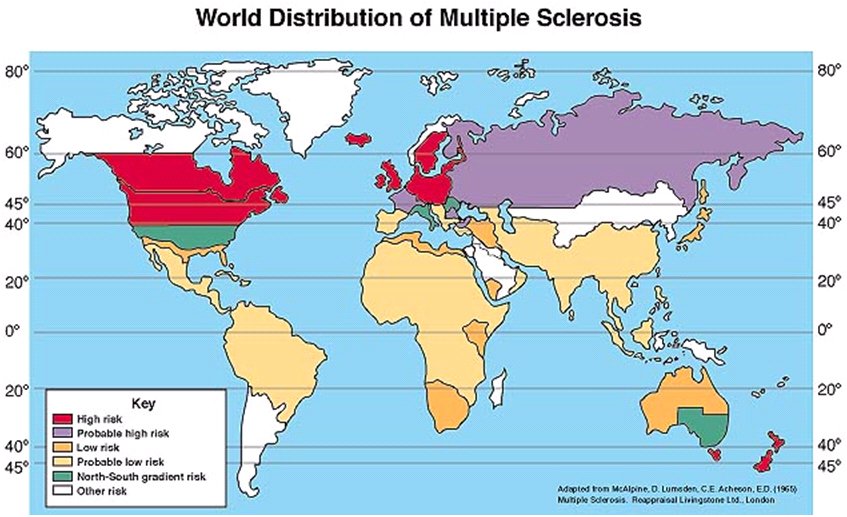 One research study examining this effect suggests a strong correlation with a confidence interval of p= 0.002 for relationship of MS and latitude. Other studies have shown similarly strong relationships, but the exact cause cannot be determined. This risk appears to increase when an individual moves to a geographic region in which rates are higher as offspring of immigrants demonstrate increased incidence rates suggesting an environmental trigger. There is also a significant amount of research demonstrating an increased ratio of women over men with increasing latitudes among European countries.  Increasing sex ratio is believed to be associated with temperature as birth rates of women tend to increase with decreasing temperature. Women have three times the rates of MS than women do. Whether this has anything to do with the increased rates of female births at the 49th parallel or a gender specific causal relationship is difficult to determine. Individuals with MS do not tolerate extremes of temperature well with extreme cold and extreme hot worsening symptoms of MS. Are people moving to the 49th parallel because they tolerate its milder temperatures or do the temperatures contribute to MS or are there other contributors associated with the 49th parallel further confusing these relationships?

Misdiagnosis of MS is another major problem further confusing these statistics. One recent study published within the journal Neurology found misdiagnosis a common problem exposing people to potentially harmful MS treatments. This was reiterated in an article interviewing physician Michael Olek a neurologist specializing in MS working in Eastern Washington who discovered a large number of patients misdiagnosed for MS coming to his clinic. Despite some articles claiming higher rates of MS in Spokane most specialists believe rates are similar to other regions within the country. Providers within Eastern Washington hearing of these higher rates may be predisposed to confirmation bias as a result. If you suspect MS or have a family history make sure you see the appropriate professional and they perform a comprehensive series of diagnostic tests using the McDonald Criteria to distinguish MS from other diseases.

Thank you for taking the time to read this article. I hope the information assisted you in understanding the disease and the difficulties encountered in determining the true picture of MS here in Washington. Stay tuned for part two of our “MS Doesn’t Have to be a Mess” posts describing how to care for MS inside the home. Like always please post a comment below and if you are in need of home care please visit us at www.advanced-healthcare.com.